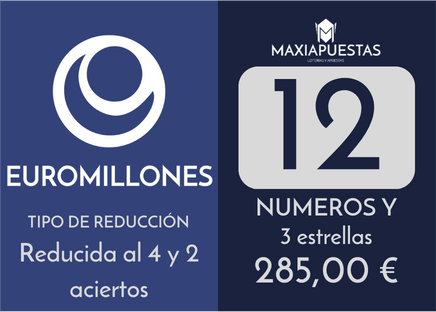 Euromillions is one of the Lottery and Betting draws that distributes the most prizes. It is a European game in which various countries participate, so the jackpots accumulated on each day are usually very large. Next, we want to explain how this draw is played, when it is held, the different game modes and how the prizes are established. We encourage you to continue reading, to discover all the secrets of this magical draw.

Maxiapuestas allows you to play Euromillions online, in a simple way and without commissions. The price of the ticket will be the same as at the window. In addition, you will receive your scanned ticket in your email.

Before you continue reading, we want to remind you that at Maxiapuestas we are experts in combinatorial. If you already know everything you need to know about this giveaway, you may want to take action and start playing. We would like to recommend some of the reduced systems that will allow you to play more numbers for less money.

Euromillions reduced from 11 numbers to 2 if 2 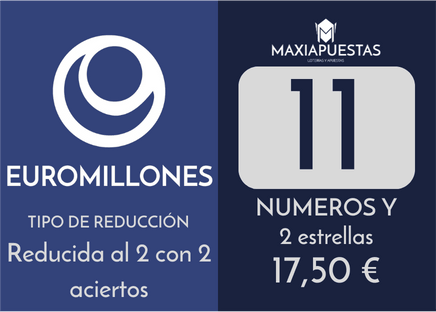 Euromillions reduced from 13 numbers to 3 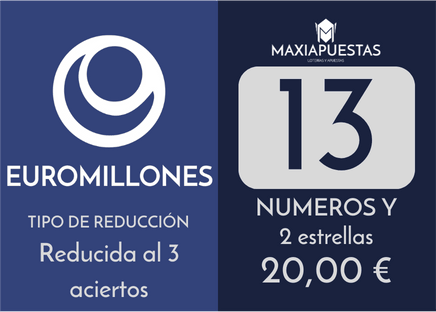 Euromillions reduced from 17 numbers 2 if 2 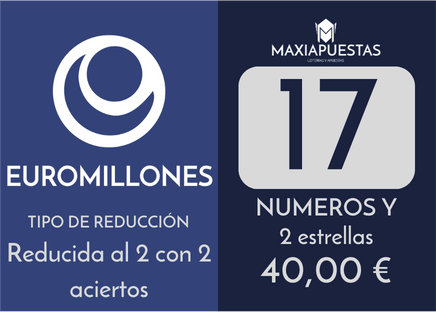 WHAT IS THE EUROMILLIONS DRAW?

The Euromillions draw is a lottery game promoted by nine member states of the European Union. It was launched on February 13, 2004 with a first draw held in Paris. This lottery crossed national borders and followed in its conception the wake of the single currency, proposing a European game. Spain, France and the United Kingdom were the promoters and founders of a proposal that has been spectacular in its European reception. Today, countries such as Austria, Belgium, Ireland, Luxembourg, Portugal and Switzerland are also joining, and other countries are expected to join in the future.

The main attraction of this draw is, without a doubt, its succulent jackpot. By adding participants from so many countries, the amounts that are raffled in each Euromillions draw are very high.

There are various ways to play EuroMillions. You can play from a lottery administration or from an official receiving office. Today, thanks to technology, you can also play EuroMillions online . Currently, the maximum amount of the prize allocated to the first category reaches  200 million  euros, with the possibility of progressively increasing the  maximum amount to 250 million  euros  .

The Euromillions draw has two linked draws that allow you to expand the prize obtained. They are The Million Euromillions and the Rain of Millions.

HOW TO PLAY EUROMILLIONS ONLINE?

To play Euromillions online you only have to select your numbers and click on validate bet (simple play). You can make multiple plays (multiplay) by selecting more tickets with the dates appearing just above the numbers. Once you have filled in your participations you just have to click on validate bet .

You can buy your tickets without leaving home using your credit card, your Maxiapuestas wallet or by bank transfer. We will send your scanned tickets to your email . We have the certification and guarantee of secure payment, issued by the entity Thawte.

The distribution of online euromillions prizes is distributed as follows. 50% of the total amount raised through the sale of participations in all participating countries is allocated to prizes. The jackpot will be distributed among thirteen prize categories:

Do you want to know the statistics of Euromillions? You can visit our post "Euromillions most awarded numbers" . According to the official statistics of State Lotteries and Bets, the numbers that have come out the most in the draw over the years are the following:

The stars that have come out the most in the draw are:

Today two  EuroMillions draws are held weekly , one on Tuesday and one on Friday. On our website you can see the Euromillions results and the Euromillions jackpots that are played in each draw.

One of the reasons that explains the success of the draw is, without a doubt, the volume of the prizes that it has distributed. Since its inception, the  Euromillions jackpot  has had a minimum jackpot of €17,000,000. If there is no winner, the corresponding jackpot is accumulated for the next draw. In the same way, the Euromillions draw has, as of today, a maximum jackpot of €200,000,000.

Euromillions is a game of great scope, as is the European Community of which we are a part and in whose countries the tradition of the lottery is lived as a form of social culture that has stimulated the illusions of its citizens.

Currently, the cost of a simple bet in the EuroMillions draw is €2.50. Therefore, if you want to play both draws of the week (Tuesday and Friday), it will cost you €5. 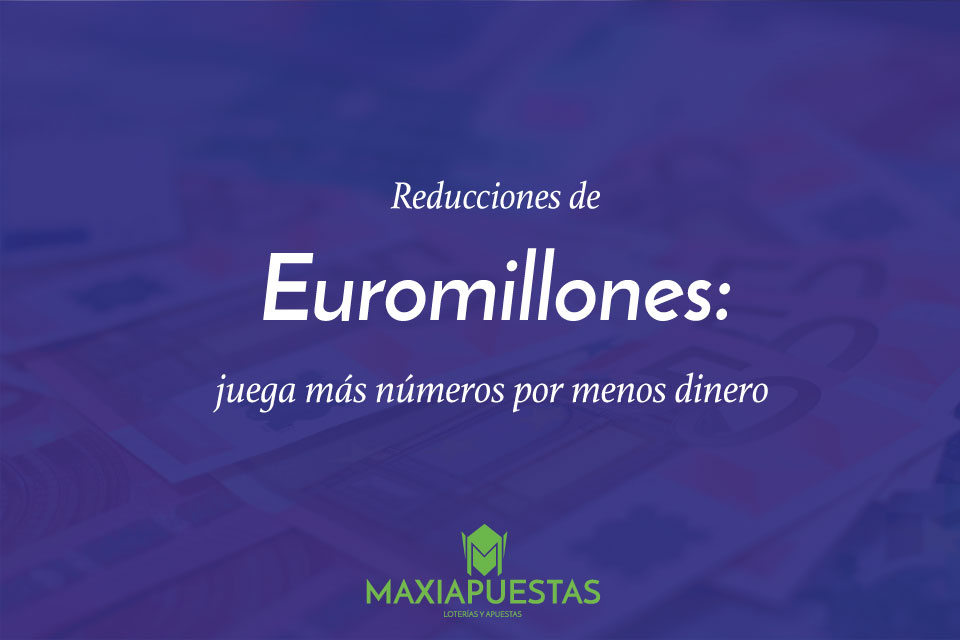 DOWNLOAD FOR FREE THE BEST COMBINATORY SOFTWARE TO PLAY PROFESSIONALLY