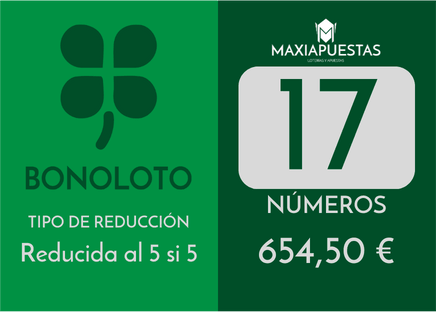 OUR RECOMMENDED REDUCED SYSTEMS OF THE BONOLOTO

BONOLOTO ONLINE: HOW TO PLAY THE BONOLOTO

This game, which arrived in our country in the 80s, is based on the choice of six numbers out of 49 possible (from 1 to 49). Currently, the bonoloto is the draw for the State with the cheapest price, since each ticket can be purchased for only € 0.50. Its low cost means that you can play more numbers without spending a lot of money, thus increasing your chances of taking a prize.

Now you can play the bonoloto online safely with any device (computer, mobile or tablet). To play online bonoloto you will only have to create your user account and select your numbers on our website. You can buy your tickets without leaving home using your credit card, your Maxiapuestas wallet, bank transfer or with virtual cards (uPay). We will send your scanned tickets to your email. We have the certification and guarantee of secure payment, issued by the Thawte entity.

You can make several plays with more numbers () by selecting more tickets from the bonoloto with the arrows that appear just above the numbers. Once you have filled your participations you just have to click on validate bet.

By playing the multiple primitive you will be multiplying your chances of winning and the amount of the prizes up to 17%.

The winning combination of the bonoloto is obtained by extracting 6 balls numbered from the 49 that are introduced in the drum. Along with the six numbers that make up the Winning Combination a seventh number named Complementary is extracted, destined to offer a prize to the winners of 5 numbers that also correct this number. The player does not choose the complementary complementary number: this figure is an additional number that is obtained in the draw and that has to match one of the numbers of your combination.

The Bonoloto Raffle allocates 55% of the collection of each raffle to prizes. Bonus awards are distributed as follows:

The reductions of the bonoloto allow us to play more numbers for less money.

When you play the reduced bonoloto, what you do is give up playing part of the possible combinations. In this way, you aspire to smaller prizes, but with greater guarantees. Not being able to aspire to the total prize, the move is cheaper. Thus, with the same money you can make more bets and play with more numbers.

At Maxiapuestas we have reduced bonoloto systems at your disposal.